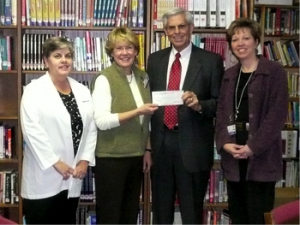 “Nurse Crizer!” “Nurse Crizer!!” “Nurse Crizer!!!”
Any time during the school day those words ring out in the halls, the office, or the clinic at Houston High School. Why? Because that gets the attention of every student’s favorite person ¾ the one who ministers not only to their physical needs, but also to their emotional needs. Plus, she’s just plain fun!
Neonatal nurse, cardiovascular ICU nurse, and cardiac research nurse are all on Marsha Crizer’s resume. In her 27 years of nursing, Mrs. Crizer has chosen to be a school nurse for eighteen of those years. “Chosen” is the operative word here because it’s a choice few make. The pay is lower, the scope of schools is large and she sort of lives in limbo, somewhere between the health department and the School Board which pays her salary. But…Mrs. Crizer loves her job. It’s evident to all who come in contact with her ¾ parents, teachers and most importantly, the kids. They know they are her kids. That counts in a big way!
Nurse Crizer makes a difference in the lives of the students here, especially in the life of one young man with a disability. Up every day at 4 AM, she drives 20 miles to his house. She’s at his bus stop whether it’s 100-plus-degrees, 26-degrees, or pouring down rain. Day in and day out she bumps up and down on that school bus with him ¾ not to mention all the 40 other students on Bus #309, Mr. Newson’s bus. Dubbed the “oldest senior” on the bus, she uses that time to build relationships with all the other riders. Last year she made holiday cookies for the 60 students on her route. On Fridays, her favorite bus driver receives a cold, refreshing Diet Coke from her, because she takes care of him too.
At the end of the afternoon bus ride from her base school, she often travels to her three other assigned schools to help out with record keeping.
While on vacation this year, she took time to teach a diabetic student how to take his blood sugar. Nurse Crizer has even accompanied students to the hospital ¾ sometimes riding behind the ambulance and one time actually riding in the ambulance with a young man, offering comfort and assurance all the way to the ER and his awaiting family.
During the school day, she seems to be everywhere. Everywhere but lunch, that is. She rarely has time for that. She’s too busy helping her co-workers. Frequently, when not dispensing meds, supplying band-aids and tissues or taking temps. She’s manning the phones or helping the attendance office enter power school data ¾ all while keeping an eye on the clinic for new arrivals. On the weekends she can be found at HHS sporting events whether huddled under a blanket for football or jumping up and down at a basketball game. Last year she received a special basketball shirt from the team and coach. Why? It was the team’s way of saying thanks to one of their most loyal fans. Nurse Crizer sees the kids as her own and she is always there for them.
In the springtime, she rolls up her sleeves as a master gardener and gets dirty. Planting petunias or just picking up litter is just something she does when there’s a need. Often, she even drives back to school to walk the track with one of the secretaries to provide a listening ear and “come alongside” encouragement for one who’s trying to lose weight.
“Nurse Crizer rocks!” says Bibi, an HHS senior and fellow bus rider. “I can tell her about anything ¾ boys, school, and even family. She believes in me. Some people are blessed with one mother. With Mrs. Crizer in my life, I’m blessed with two.”
“She’s cool,” says Elizabeth. “Everybody loves Nurse Crizer.”
Ben, a 12th grader, sums her up: “She always has time. She never turns you down.”
At Halloween, she can be seen making her rounds in the hallway, dressed in a hospital gown, toting a bedpan and dragging an IV pole. Or maybe she’s dressed as a blind referee with sunglasses and a cane. She keeps the students guessing and they love it. Already they are anticipating what Nurse Crizer will come up with this year.
For the student who is physically ill, she’s there. For the student who needs a hug, she’s there. For the student who’s lonely, she’s there. If a student needs a safe place, he or she heads to the clinic. Students get their physical and emotional needs met in Mrs. Crizer’s clinic. Then, they are able to return to the classroom ready to learn. The learning environment in the classroom flourishes when students are physically and emotionally well. Nurse Crizer does her part in their “healing” process.
Her clinic door is always open. It’s not uncommon to even see a faculty member in there having his blood pressure checked or getting info/recommendation for an ailment. Her doorway note board holds inspirational quotes that “make our day” as well as love notes from the students. As Elizabeth said, “Everybody loves Nurse Crizer!”
Kids at Houston appreciate Nurse Crizer’s listening ear. That’s what it’s all about. That’s what makes the difference — she cares; everyone knows it ¾ and that makes all the difference in the world.