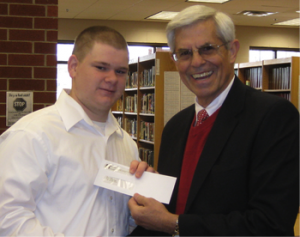 At my old school in Spring Hill, Tennessee, I had a guidance counselor named Mr. Flynn. He was always there when you needed him whether to talk about some problems that may have been occurring at various points in your life; or if you just wanted to hang out on break. Now, Mr. Flynn had an inspiring story of his own; he was a construction worker and had an accident on the job site, he fell 2 and a half stories and lived. Although he did suffer complications from said fall; he was paralyzed from the waist down. He has been in a wheelchair since he was 20 something years old. He was around 50 when I knew him so he had been in a wheelchair for more than half of his life.
Like was mentioned previously he was there no matter what, but at the beginning of 7th grade is when I needed him most. My father passed away on August 14, 2005; school started August 15, 2005. So, yes my father passed away that Sunday and school started that Monday. I missed the first week of school, so the following Monday when I got my schedule and my locker number I was putting my binders in my locker. Before I could even get a chance to go and talk to him he came up while I was in the process of putting my binders away and told me he wanted to talk to me.
That first time we talked was the hardest, it was only a week after the passing of my father and needless to say that’s what we discussed. He always knew just what to say to make you feel better no matter what may have had you down that day. My story was much different than other stories in the school and my talks with him took much longer and they stretched out through the school year in its entirety. I met with him every day that year. He had it scheduled for me to get out of class every day to come and talk to him. We did not always talk about my father; we sometimes discussed cars and what not. I did not realize his point at the time but his point was to get my mind off of the subject. He told me the normal grieving period is close to 18 months. There were times when I was really feeling down and just talking to him made me realize I had the courage to get through this.
He was not only my guidance counselor, but he was also one of my best friends that year. I ate lunch with him every day and hung out in his room and watched television. I had way more fun in there with him than I did in the cafeteria with the rest of the kids. He also discussed my school work with me, and if I was having trouble with any particular assignment he would try to help me with it and if he failed to do so he would go and get an older student to help me with it until I fully comprehended it. He inspired me to excel to my utmost abilities even on the days I may not have felt the need to do so. He made me realize that even though I witnessed the most tragic and heart breaking experience of my life; that my life was not over and that not caring about my life is not the answer. He made me realize the best way to do it is to actually do better in my life instead of not trying.
We discussed a lot of topics that year and by far the most touching was in fact the passing of my father. As I mentioned earlier, he tried to talk to me about other subjects to get my mind off of that one; but there were some days when he felt the need that discussing the subject would be the best thing for me to do no matter how much I may not have felt like it. Some days I didn’t even feel like discussing it because I thought it would do more harm than good, making me feel worse than I did, but to my surprise it would actually make me feel better to discuss it. He always knew what would make me feel better on any particular day, whether it be discussing it or not discussing it.
Even now, four years after the most tragic event of my life occurred I still think about my father, I think about him every day. I also remember what Mr. Flynn always told me; remember the good things, the happy events that occurred while he was living, don’t remember him from his passing but from his living. Those were probably the greatest words I heard that year it really inspired me to remember my father for what he was when he was alive and not what he looked like when he was lying on that hospital bed. He may not have said these words directly but this is what I inferred from the inspiring words he did tell me; my father is the man that took me to the various activities, the man I could hang out with whenever I wanted, the man that was there when ever I needed him to be there for me, the man that always knew the answers to my questions.
So, I have had many great teachers in my 13 years of schooling, and I have learned a lot through the years, some of which I learned may help me later in life, some of which may not. Mr. Flynn may not have been an academic teacher that I have had, but more of a life teacher. What I learned from him helped me then, it helps me now, and it will continue helping me throughout the many years of my life.