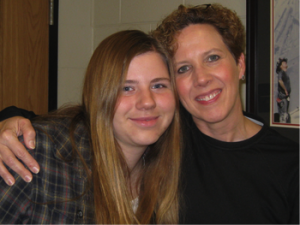 I’ve never really appreciated what school counselors do. It always seemed that when we had guidance for a special class in elementary or middle school, all they did was teach us songs and games. They made the classes fun, but I never really realized the importance of a counselor. I really thought that they were there just for those reasons. My opinion changed when I actually needed to talk to one.
I met Mrs. R.C. in October of last year. My brother had died a few weeks before in a car wreck, and I was having a really hard time dealing with it. My mom called the school and requested that one of the guidance counselors talk to me, thinking that maybe it would help me cope. I was dead set against it at first. I didn’t want to talk to my friends or family about it so why would I vent to a complete stranger? My mom insisted on it though, so I went ahead with it just to make her happy.
I remember the first time they called my name over the intercom to go to the guidance office. I walked as slowly as I possibly could. Of course, I was nervous. I had never talked to this woman in my life! I remember Mrs. R.C. smiling and being very friendly when I walked in the guidance office. She has to be this nice. It’s her job to do so, I thought as I followed her into her room. I hadn’t even sat down, and Mrs. R.C. had already started talking just like that. This was okay with me. At least she didn’t expect me to start. She told me that she wasn’t going to make me talk about anything I didn’t want to, and she certainly didn’t expect me to feel comfortable enough the very first day.
She made plans for us to meet once a week for awhile just to talk and get used to each other. I was okay with this. I actually felt really comfortable with her already. She told me that we were just meeting to discuss what she had planned, and that this wasn’t really even an actual conference. By the time I left though, she knew the whole story. After the course of meeting with Mrs. R.C. week after week, I got to know her and started looking forward to meeting with her.
When we would meet, I would talk to Mrs. R.C. about the day my brother died and everything that had been going on because of it. She always asked about my family and how they were holding up when she didn’t have to. Sometimes, I would talk about the things my brother had done and I would show here pictures of him and of his baby. It didn’t matter what we talked about, she always made me feel better. I remember at one meeting we were talking, and she told me that I would eventually get better and it would get easier to move on with time, but I would always have a place in my heart for my brother that no one could ever replace. Every time I met with her she was always so nice and seemed like she truly cared how I felt.
In one conference, she told me that she had two brothers, and they had both died. This was something we had in common, so she knew how I felt when there was no one else I felt that did. When I would tell her something, I expected her to tell me there was reason I took something one way or that I was just feeling that way because of this reason or that reason. She didn’t though. She talked things out with me and voiced her opinion quite frequently. Most of the time she even agreed with me. That made me feel so much better, because at least one person seemed like they knew how I felt and why I felt it. One of the qualities that I like most about her was that she listened. Instead of interrupting me when I would tell her something, she would sit there and listen until I was completely done and then talk. For some reason, that always meant a big deal to me.
I realized after meeting Mrs. R.C. that this woman is great at her job, and I had underestimated her and all my other counselors before. Now, I realize how much school counselors help, and that they don’t get enough appreciation. It makes me want to go into a profession like Mrs. R.C.’s so I can make a difference like she does. She helped me so much, and I think I have gained a friend on whom I can rely. I will forever remember her office that is way too over decorated with Tennessee Vols, the caring look that is always on her face, and the way she understood when no one else had a clue.