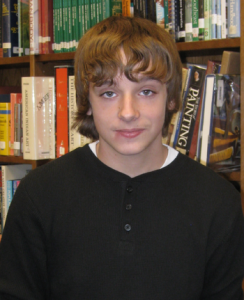 How can one find the right words to say about a teacher, friend, father, mentor, and hero that touched so many lives? Is it even possible to give his name the justice it deserves? I do not think there is, but today I would like to take a few minutes of your time to tell how this amazing individual has touched not just my life but the lives and hearts of many. The man I am speaking of is Mr. David Carr.

Mr. Carr first came into my family’s life when my older sister enrolled into his agricultural science classes her sophomore year. Little did I know what was in store for all of us when she did. Day after day she would come home telling me how great this class was and how much fun she was having. That is right, fun, not always the first word that pops into your head when thinking of school, teachers, and work. That’s just it though, you see, Mr. Carr knew how to make things come together and project teaching in a way that most teachers cannot. He had fun; he laughed, and befriended his students. He saw his students’ talents and always had just the right position for them in his FFA program. My sister was one of his public speakers.

Honestly, she got on my nerves practicing all the time for her competitions. By the time the competition arrived I could have competed for her as much as she made me listen to her speech over and over. At first, I did not get it. What could be so exciting about cows, horses, pigs, and farms? Then my sister did me a favor and got me out of my class early one afternoon and took me to Mr. Carr’s room. As soon as I walked through the door, I knew that class had something special. There were trophies, medals, plaques, and pictures of state and national winners covering the walls. Wow! Amazing! How could one small school have so many titles and awards at state and even national levels?

I had never seen a classroom quite like it. Then I met Mr. Carr myself for the first time. He was so cool. He did not start talking about cows or pigs but about football. I thought to myself he must be a pretty o.k. dude if he likes football. Then he took us out to the shop and showed me some of the tools they were using to make a storage building. He showed me how the saw worked and everything. I thought wow this isn’t just about a bunch of farm animals and right then I decided I too would join FFA when I was old enough.

Mr. Carr’s influence did not stop there. Over the years, I have watched him through my sister, through activities he has done, and visiting him to get his opinion on essays I have done. I would like to take this time to tell about a few of the great things he has been a part of and helped put together.

First, one of the biggest projects I remember is called Heartstrings. This was a project aimed at awareness of how every child deserves a beautiful head of hair even if they may have lost their own hair due to cancer or some other illness. Several of his female students decided they would donate their own hair to the cause. I will never forget how upset my mom was when she first heard of this. She did not want my sister to cut her hair because my grandpa, too, was battling cancer and loved her long hair and did not want to see it cut. As much as she opposed it at first, she knew it was for a good cause and supported her decision in donating her hair, even though she still had a little resentment toward Mr. Carr for putting the whole thing together. However, that resentment faded the day of the big haircut. The entire school was gathered in the gym; my mom of course came and sat right next to Mr. Carr. When the cutting began, my mom was in tears, thinking how all that beautiful hair was being chopped away. Then she looked next to her only to see Mr. Carr crying like a baby himself. He told my mom that as good of a cause this even was he could never ask his students to ever make that big of a sacrifice ever again. It must be a girl thing but for most of them cutting their long hair is a hard thing to do and Mr. Carr saw this on that day.

Another project he started was the annual angel tree. This project got the whole school involved. Students can go to his room around Christmas to pick an angel; a little girl or boy, from the angel tree. They are children from all over the county whose family did not have the funds to give their kids a nice Christmas. Students can buy the kids toys, clothes, shoes, or anything they have on their list. This gave students a way to do something good for someone and to give back to our community.

Giving, it’s a perfect word to describe Mr. David Carr. He was always giving. Giving his time, money, blood, sweat, and tears. He never let a student go without. Even though I was not yet old enough for his class, he would still take time out of his day to proofread any essay I had written for school. My sister and I would go see him after school to hear his critique. He always gave his honest opinion too. If he did not think I was writing to my full potential he surely made it known. He always pushed me to write better and encouraged me to always do my best. He would always say to me that he could not wait for me to be in his class and I could not wait either.

Sadly, that day will never come for me to be in Mr. Carr’s FFA program. Unfortunately for all, he passed away last year due to complications from a heart transplant surgery. I know so many people prayed for him to get better, but the Lord decided to call him home. It is a tremendous loss for all who knew him.

There have been several teachers, church members, and family members who have influenced me over the years, but none like Mr. Carr. He had whatever it is to get through to me and so many others. There is one thing for certain; Mr. Carr’s legacy will live on through his students, coworkers, friends and family for decades to come. He was a great man who tugged on the heartstrings of many, but without a doubt anyone who knew him would agree that Mr. David Carr had the biggest heart of all.