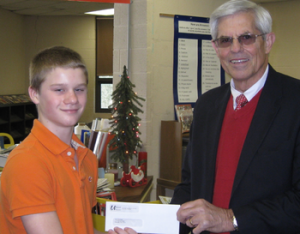 Today in competitive sports, it is hard to find a coach who is not focused on just winning games. Believe it or not, during my first year of football at Jim B. Satterfield Middle School I met a coach who was about more than just winning. I met a coach who taught me about the game and about how to act on and off the field. This coach, Trousdale County’s own John Carey, made a difference in football as well as the way I look at things in life.

I first met Coach Carey at football tryouts during the end of my sixth grade year. Immediately, I knew I would like him as a coach. I was drawn to his positive attitude. Even in tryouts, he started teaching me about respect. Coach Carey could have had the worst day in his life, but no one would have ever known. He came to practice every day with a smile on his face and always in a good mood.

During our first game of the season, we were losing at half-time. Coach Carey came into the locker room and talked to the team about having heart. He told us when you are losing and your backs are against the wall, you have to have heart to pull through. He told us how we handled ourselves on the field would help us handle ourselves in life. We ended up winning that game.

Coach never got angry or talked down to us. He taught us how to be a team. Teamwork is about helping each other, not about one person. Coach Carey supported us through thick and thin. In a game we were losing he never left our side, even when his wife was going into labor.

Over this football season, Coach Carey taught me many life lessons. One of my favorites was to learn to look at the bottle as half full, not half empty. I am inspired to do the right things, not only for my football team, but in life. He taught me how to handle myself in a positive manner, without using aggression. Coach Carey told me how to look at the good things in life.

In conclusion, I feel fortunate to have met Coach John Carey and to have been a part of his team. I am lucky to have been coached by someone I respect and look up to. I learned many things during this past year. One is that football is more than just a game to me. Another is that Coach Carey is more than just a coach, he is a friend. Of all the things he taught me, the most important is now I know what kind of person I want to be. He has definitely made a difference in my life.