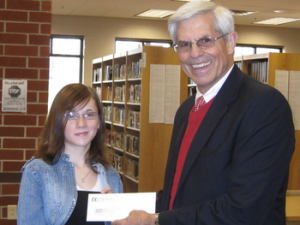 There’s a teacher at Trousdale County High School named Mr. Paxton. Mr. Paxton has inspired me to be a good, kind, and Christian person with a strong work ethic. Not only was he a Special Ed teacher in the middle school, but he is also a bus driver, assistant band director, and the person who’s in charge of the alternative school during school hours.

Before Mr. Paxton started working in the alternative school, he worked as the Special Ed science teacher in the middle school for several years. Even though I was never in his class, I’ve heard nothing but good things about him and his teaching ability. His past students have told of how patient he was with them. If just one person was having a problem, he would do anything he could to help them understand and get caught up with the rest of the class.

Along with being a well-respected teacher, Mr. Paxton is also a bus driver. I have been riding Mr. Paxton’s bus to and from school ever since I started kindergarten. He is a very talented bus driver and he is always in control. Everyone on the bus respects him and behaves in a well-behaved, disciplined manner while on his bus. He always works hard to keep his bus clean and in good shape so the ride is as enjoyable as possible.

As well as driving the bus for the school, Mr. Paxton also drives the bus for all the band trips as the assistant band director. As assistant band director, Mr. Paxton must: drive the band to the concerts, football games, competitions, and other various places that we need to go; find the best, easiest, safest routes to get where we’re going as quickly as possible; plan itineraries and figure out what time we need to be wherever we’re going, how long it will take to get there, when we need to leave, and when we will get back home. Believe it or not, that isn’t even half of everything Mr. Paxton has to do for the band. I could go on for hours about all the things he does for us and all the ways that he inspires us in school and out of school.

Speaking of “out of school”, Mr. Paxton was also appointed just last year to be in charge of the new alternative school during the day. In my opinion, Mr. Paxton was chosen for this job because everyone respects him and he has amazing leadership skills that enable him to get people to have and show some discipline while around him. Just his presence and the way he carries himself demands respect and show authority. Of course, just like his former Special Ed students, everyone who comes out of the alternative has to admit (no matter how much they don’t want to) that they really did learn while they were in there and that Mr. Paxton is a really good teacher. In conclusion, I’d just like to say that I believe Mr. Paxton is a very inspirational man, and anyone that gets to know him will be affected or changed in some way. I admire his work ethic because even though he has a busy and hectic schedule with all his bus driving, band directing, and teaching he never stops helping. He rarely gets to go home and just spend time with his family because his weekdays are filled with school and band practice in the evenings, while his weekends are taken up by football games, competitions, and worshipping God. Even with all these things which surely must exhaust and frustrate him at times, he never stops going. If one of the band kids needs him, he’ll always be there in a heartbeat. For all these reasons and more, I believe that Mr. Steve Paxton is one of the most inspirational and admirable people that I’ve ever met in my whole life.