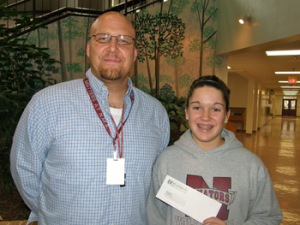 Have you ever been in a class, doing an activity, minding your own business, but then there is a challenged kid being left out? Most people would say, “Aww, I feel so sorry for them. I wish there was something I could do,” and then never do anything about it. This person didn’t let that happen. My gym teacher and former track coach, Mr. Swiney, made an autistic gym class.

He didn’t just care about the kids who could catch a football or kick a soccer ball into a goal. He also cared about the kids that had obstacles in their way and overcame them. He pushed for this gym class so he did not take anything away from anybody’s ability. He may look all big and mean on the outside, but on the inside he has a big heart. He is a true example of not judging a book by its cover.

The gym class has helped many of the autistic kids become more welcome with the regular kids. Now, some of the kids even sit with us at lunch, and sometimes on Thursday during lunch, some of the football players go eat with the kids that do not eat in the cafeteria.

Mr. Swiney has opened up a lot of doors for our school, community, and county. I think that a lot of people take what they have for granted. They have to try really hard to catch a ball, while the ones with no disabilities can catch it on the first or second try.

Mr. Swiney, the people that helped the autistic kids and the kids went to the Special Olympics. I wasn’t even in the class and I could tell that they were setting a big example throughout the school.

Our gym teacher is not your average gym teacher; Mr. Swiney is more than that. He is a caring man, fun to be around, and does not forget about others. He deserves to be respected for the achievements he has made.

I would like to close by saying, “Thank you Mr. Swiney.” You are a real hero in our school, and have set a real example of how to be a magnificent person.