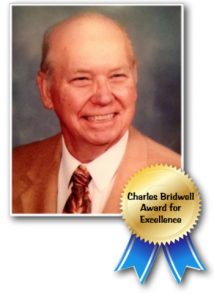 The award is given annually to the three school boards in Utrust with the lowest average per employee unemployment compensation claim.  The three divisions of the award are based upon the number of employees:  under 200;  200 – 499;  and more than 500 employees.

The Award was named in honor of Charles Bridwell of Kingsport who served as a member and chairman from 1986 through 1991 of the Tennessee School Boards Unemployment Compensation Trust. The name was later changed to Utrust.

“Charles Bridwell was chairman of Utrust when the board hired its first money manager and began to do well with its investments,”  according to Dr. Dan Tollett, Utrust Administrator. “He was a strong and effective leader and passionate about the mission of Utrust.”

Utrust Board Chairman David Jones of Hancock County said, ” Charles Bridwell is quality through and through.  He was an outstanding chairman and he consistently led us to make the best decisions for the future of Utrust.  He helped put into place key policies and procedures still used to guide Utrust today.”

He also distinguished himself as a long-term member and an outstanding Chairman of the Sullivan County Board of Education and as President of the Tennessee School Boards Association.

He was an ardent supporter and outspoken leader of Utrust. Under his leadership, the trustees employed their first investment consultant and reaped considerable benefits on investments as a result. He continuously  promoted the trust, monitored claims and looked for ways to keep them to a minimum and investments to a maximum.

He was consistently an outstanding gentleman, a strong supporter of public education,  a model citizen  and an excellent former trustee who helped to build Utrust into a strong and effective organization.